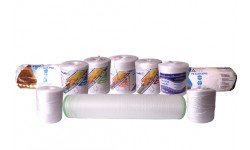 In July 1831 Cyrus Hall McCormick launched their mechanical reaper, which served for grain separation. The time that was spent by peasants in field during harvest was significantly shorten with reaper McCormick. This has changed the methods of harvest in ХІХ century. The second half of ХІХ is characterized with tough competition between the producers of mechanical reaper. One of them was “McCormick Harvesting Co.” company.

12 August 1902 is known in the history as the day of executing one of the biggest deal on agricultural machine building market. The giant of the industry, “International Harvester” company with $120 mln capitalization, has appeard as a result of the merger of “McCormick Harvesting Co.” with other four similar producers. The founders of IHC were McCormick Harvesting Machine Company, Deering Harvester Company, Plano Machine Company, Champion, Wardner, Bushnell & Glessner Company and Milwaukee Harvester Company.

In 1981 International Harvester Corporation (IHC) celebrated its 150th anniversary and harvest combines became the most important product of the company. More than 170 years old traditions of mechanistic harvest that were established by first reaper McCormick nowadays are continued by transnational company “CASE NEW HOLLAND” (CNH).

The history of CASE dates back at 1842, when Jerome Increase Case has established the “Racine Threshing Machine Works” factory that produced mechanical reaper. In 1869 the production line was expanded with паровых двигателей, and in 1886 CASE became the world leader in the sector. The founder of the company has died at the age of 72 years in 1891. Later on the company that was founded by Case and named after him “J.I. CASE” was producing agricultural machinery and in particular tractors. In 60th it was a part of “Kern Country Land Company” from California which specialized on farming and was an owner of million acres of farm land.

In 1967 financial giant “Tenneco” decided to invest in agrobusiness. One of his purchases became “Kern Country Land Company” and “J.I. CASE” company as a part of it with tractors production. “Tenneco” used CASE name as brand they manufacture because it has good reputation and solid history. In order to understand finance power of “Tenneco” company we have to come back to 1947 when “Tennessee Gas & Transmissiom Company” was born. Geologist Mr. Gardiner Symonds was one of the owners of the company. His second education was management and he had also finished Harvard Graduate School of Business. He earned first solid money as “Chicago Corporation” partner in 1943. Corporation received many orders from government for pipeline buildings from Texas to West Virginia

TENNECO’s involving in farming didn’t stopped. At the same time the network of grocery shops was under construction and purchases of producers of an agrotechnology were carried out. In 1969 the share Tenneco reached 91% in CASE. In 1972 the tractor plant David Broen, England was acquired. In 1979 there was "CASE TENNECO" agreement with "CUMMINS ENGINE Co. " concerning development of economic diesel engines. In 1980 the joint venture"Consolidated DIESEL Company" in is based Rocky Mount, North Carolina.

In 1980 the world, first of all the USA shook an economic crisis. The state of one more company, the producer of harvesters combine of "INTERNATIONAL HARVESTING Co", became deplorable, however she continued to remain one of leading producers of agricultural machinery. In 1984 “IHC” became another purchase of “TENNECO Inc.” company that has saved IH from bankruptcy. The Department of Justice in USA has confirmed that the ownership of “INTERNATIONAL HARVESTER Co” was transported to “CASE TENNECO” from 1985. In 1986 the same story happened to “INTERNATIONAL HARVESTER AUSTRALIA Ltd.” and “INTERNATIONAL HARVESTER CREDIT Corp.” In the same year Tenneco bought “STEIGER TRACTOR Inc.” that belonged to“FAGRO”, North Dakota.

In 1987 “CASE IH” has lost 253 mln dollars whille selling the 94th tractor series and organizing the promotion campaign “two for the price of one”.All these investments needed money and this made “TENNECO Inc.” to sell its oil business in beginning of 1990th, then in 1994 it sold 54% and 23% of CASE IH shares in 1995. As a result, in 1998 “TENNECO Inc.” has declined to 254th place (from 5th) in “Fortune 500” list. However they didn’t stop investing the agribusiness. The new owners of CASE IH continued the list of purchases.

Establishing of “CASE Harvesting Systems GmbH” in Neustadt, Saxony, Eastern Germany, the homeland of FORTSCHRITT combines, was a result of activity in Europe. Before these mergers CASE specialized on manufacturing rotor harvest combines only. After they got new European traditional harvest combine technology. CASE developed the new harvest combine and bellers models together with the help of FORTSCHRITT R&D engineers. E517 and E525 FORTSCHRITT models had been used as the base.

In 1999 shareholders of CASE IH and NEW HOLLAND has created new transnational company CNH. Italian group FIAT is the biggest shareholder of it with 91% of shares. The company shares are presented on NYSE under the CHN name. The capitalization of CNH is $15,6 billion in 2010. The headquarters of the company is located in Amsterdam, Netherlands.

The company is manufacturing such brands as CASE IH,NEW HOLLAND, STEYR. Starting on 1st January 2013 the changes in CNH agreement with  с “Kobelco Construction Machinery Co., Ltd.” Will take place. Both companies are unwinding their joint ownership and equity participations in all the companies formed in connection with their previous alliance and eliminating any geographical exclusivity rights associated with their agreements (source - www.cnh.com).

In 2007 the “CNH International” company was established with headquarter in Switzerland. The goal was to increase CHN brands activity in countries with growth potential. КThe company is responsible for production, sales, promotion and technical service of machinery in more than 120 countries of Africa, Middle East, Commonwealth of Independent States, Asia and Oceania. The headquarter in Switzerland manage the markets development CNH International through centers, factories, warehouses and elements of dealers web, concentrating activities related to marketing, finance etc. Centers of “CNH International” are located in Stambul (Turkey), Moscow (Russia), Kyiv (Ukraine), Tashkent (Uzbekistan), New Delhi (India), Shanghais (China) and Sydney (Australia) and offices in Johannesburg (South Africa) and Bangkok (Thailand).