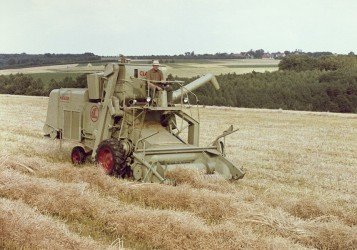 Together with production of large-sized, high-powered combines an epoch of rationalization began in farming industry. By launching two models Matador-Standard and Gigant combines “Claas” company followed the era of large-sized combines. In that time the Matador with 6 m effective width of reaping-machine seemed really huge!
In the 60s a great number of combine harvesters Matador Gigant was sold, with 125 cm width of threshing machine and 300-600 cm horizontal grasp of reaping-machine. The combine was equipped with 5,8 l Perkins engine of 89 hp, 106 hp and 95 hp capacity. The combine controlling was improved. The grain tank was designed as a part of the combine, and the engine was installed right behind it.
In 1962 smaller combine – Matador Standard was presented. It was completed with the same threshing mechanism, and the running gear was slightly smaller. Although the engine was noticeably smaller, only 68 hp, and the width of reaping-machine – 260 cm. The Matador Standard replaced a series of old SFB models.