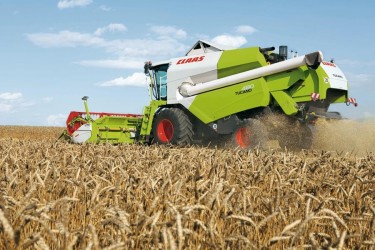 The Tucano combine of this series was presented in autumn 2007. It became a successor of the Medion and Mega combines series. The Tucano is ideal for harvesting of any crops owing to Multicrop system, which has proved its high trust status. In its threshing machine the specialists managed to wrap the main concave over the threshing drum even farther than it is presented in the traditional models. Such a large angle (151o) did not exist in any threshing machine before.

The working principle of rotary separation system of the residual grain ROTO PLUS is simple, but very efficient. The rotary drum of APS threshing aggregate supplies grain mass to the rotor. The axial rotation provides a powerful centrifugal moment, under the influence of which the grain effectively separates from the straw. Thanks to the increased up to 570 mm rotor diameter a high centrifugal force is created, which ensures effective separation of grain already in minor speed. Its result is a delicate processing of straw with maximum separation.

The Tucano combine provides effective separation of the straw with low fuel consumption. The system ACTIVE SPECIAL CUT presented in this series for the first time makes the Tucano a leading model in its class